What Yogi Can Teach Us About Marketing 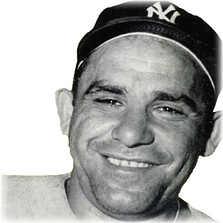 Years ago people knew Yogi Berra as the starting catcher for the New York Yankees. Today he’s better known as that guy who says totally off-the-wall stuff that’s somehow profound—without trying to be. You can hear or read “Yogi-isms” everywhere. But who knew that Yogi Berra was a genius about inbound marketing? Don’t believe me? Read for yourself!

If people don't want to come out to the ball park, nobody's gonna stop 'em. Yogi may have had a little bit of trouble with his syntax, but he had a firm grasp on one of the fundamental truths of inbound marketing. You can’t push people or make them buy your goods and services. If you don’t have what they’re looking for, you can’t make them come to your “ballpark.” Your potential customers are looking for help with their problems, their issues and their interests. It’s all about them—not you.

Yogi knew that baseball fans wouldn’t support a team that didn’t entertain them. It didn’t matter if someone was hurt or in a slump. It didn’t matter if the hot dogs at the stadium were good or not. Fans want to be entertained. If that didn’t happen, they didn’t go to the ballpark. End of story. Your customers want information that will help them accomplish what they want. They don’t want a sales pitch. They don’t want bells and whistles. And if they don’t get the information from you that they’re looking for, they’ll go to someone else’s “ballpark.”

It was impossible to get a conversation going…everybody was talking too much. Yogi hit this one out of the park. There’s a big difference between talk and conversation. Inbound marketing is really about having a conversation with your customers. What that requires is that you listen to your customers so that you know what they want. You ask for their input and you adjust your message so that it answers the questions they are really asking—rather than force-feeding them the information you think they need. Sometimes businesses appear to be convinced that the way to get customers to pay attention is to say more—or say it louder. What we need to focus on is putting out the right information in a way that makes sense to our customers.

You can observe a lot by watching. So how do you get to know your customers? How can you listen to them without actually calling them up and asking them questions? Follow Yogi’s advice. Observe them. Watch them. Find out where they go to get information. Read the blogs they read. Use the questions they ask you to do a Google search (By the way, does information about your company come up when you do that?). And don’t be afraid to point potential customers to other sources of information outside your company. They’ll appreciate it, and there’s a good chance they’ll think you gave them the information. Yogi had that one figured out, too: “I never said most of the things I said.”

Select Different CTA for each Post from Blog Editor

How To Write a 10,000-Word Blog for Lighting/Energy Control Customers (It’s Not That Hard)

Are You Dropping the Ball On Marketing? You Don’t Have To Do It All Yourself.